Identifying and Releasing Empty Volumes Back To Scratch

Due to the TKLM server being unable to issue keys TSM will assign tapes to a storage pool and then fail to write to the tape. To release the tapes back to scratch, after performing the resync you should check the TSM servers to see if any volumes are assigned to a storage pool but contain no data.  Use the following select statement to list the volumes with that 0 percent utilized. You will notice it creates a command within the results allowing you to quickly release the tapes with a simple cut and paste in the TSM admin command line.
select varchar(a.server_name,10) ||':'|| 'del vol', varchar(b.volume_name,8) as volname, b.pct_utilized, varchar(b.stgpool_name,15) as stgpool_name from status a, volumes b where b.pct_utilized=0 and b.devclass_name<>'DISK' order by b.stgpool_name, b.pct_utilized

You should see the following if TSM shows tape(s) with 0% utilized:

Run this select against all the TSM servers that have libraries that use the TKLM server and run the results through the TSM admin command line to release the tapes back to scratch. You will notice we are NOT using the DISCARD=YES flag for a reason. Without the discard flag TSM will not delete a volume that has some data but the amount is so low it still reports as 0% utilized.

TKLM has a known issue with the Java memory heap size. This memory issue results in TKLM becoming slow to respond or stops issuing keys. You can search for an Out Of Memory condition by reviewing the TKLM /tklm/tip/profiles/TIPProfile/logs/server1/SystemOut.log and looking for the following error:

If this error is present the short term solution is to restart the primary and replica TKLM instances to resolve the out of memory state. The long term solution is to change the TKLM memory settings in two files used to determine the processes memory allotment.
·         Restart the TKLM primary and replica which will flush the memory in use and allow TKLM to issue keys as before.

·         The permanent solution is to reduce the TKLM audit level to low and change the wsadmin process’s Java memory heap size. This needs to be done in two locations and can be done by following the steps provided:

1.     Backup the /tklm filesystem before you edit the files.

2.     Reduce the TKLM audit level to low by using the TKLM web GUI and navigating to
1)     TKLM > Configuration > Audit
2)     Select Low and click OK
Confirm by looking into this file: /tklm/tip/products/tklm/config/TKLMgrConfig.properties
Verify that Audit.event.type and Audit.event.outcome variables state the following:

3.     Edit wsadmin script and server.xml manually.
1)     You will find the two files that require editing, server.xml and wsadmin.sh, in the following directories:
/tklm/tip/profiles/TIPProfile/config/cells/TIPCell/nodes/TIPNode/servers/server1/server.xml
/tklm/tip/bin/wsadmin.sh

DB2 Password and TKLM Data Source Out of Sync

The Tivoli Key Lifecycle Manager Installation program installs DB2 and prompts the installing person for a password for the user named tklmdb2. Additionally, the DB2 application creates an operating system user entry named tklmdb2. For example, the password for this user might expire, requiring you to resynchronize the password for both user IDs.
Typically you can identify if the DB2 ID password is no longer in sync with the data source password when you see this error when accessing TKLM through the GUI

1.     Log on to Tivoli Key Lifecycle Manager server as root.
2.     Change user to the tklmdb2 system user entry. Type:
su <gc>tklmdb
3.     Change the password. Type:
passwd
Specify the new password.
4.     Exit back to root.
exit
5.     In the TIP_HOME/bin directory, use the wsadmin interface that the WebSphere® Application Server provides to specify the Jython syntax.
./wsadmin.sh -username TIPAdmin -password mypwd -lang jython
6.     Change the password for the WebSphere Application Server data source:
a.     The following command lists the JAASAuthData entries:
wsadmin>print AdminConfig.list('JAASAuthData')
The result might like this example:
(cells/TIPCell|security.xml#JAASAuthData_1396539704930)
(cells/TIPCell|security.xml#JAASAuthData_1396539705604)
b.    Type the AdminConfig.showall command for each entry, to locate the alias tklm_db. For example, type on one line:
print AdminConfig.showall ('(cells/TIPCell|security.xml#JAASAuthData_1396539704930)')
The result is like this example:
[alias tklmdb]
[description "TKLM database user J2C authentication alias"]
[password *****]
[userId ustklmdb]

e.     Save the changes:
print AdminConfig.save()
f.     Exit back to root.
exit
g.    In the TIP_HOME/bin directory, stop the Tivoli Integrated Portal application. For example, as TIPAdmin, type on one line:
stopServer.sh server1 -username tipadmin -password passw0rd
The result is like this example:

i.      In the TIP_HOME/bin directory, use the wsadmin interface that the WebSphere Application Server provides to specify the Jython syntax.

j.      Verify that you can connect to the database using the WebSphere Application Server data source.


WASX7217I: Connection to provided data source was successful.
Posted by Chad Small at 8/29/2014 No comments:

When it comes to encryption and TSM you find varying responses from admins. Some use the TSM server as the key manager, others implement a library based key manager, and others use a third party software product. In the past I used TSMs internal encryption key management option and while it is a set-it and forget it process it has some limitations when it comes to Exports and DB Backups.  That is where third party software like TKLM can be beneficial. I have recently implemented TKLM and after some hiccups along the way am still undecided on whether I like it.  If you use TKLM let me know your experience and if there are any issues of which I should be aware.  I'll post my hiccups next week as they will take some time to discuss.
Posted by Chad Small at 8/15/2014 3 comments:

As a follow-up to the previous poor performance post I thought I'd post what the outcome was. As it turns out we checked performance tuning settings in TSM and AIX and no performance increase was seen. We asked the DB2 admins to review any of their settings and they could not find any tunables that had not already been implemented. We sent in servermon.pl output and although they saw performance that was sub-par, they couldn't designate what was causing it. There are no server/adapter/switch/disk/tape errors so nothing emerged as the culprit for our poor throughput performance. 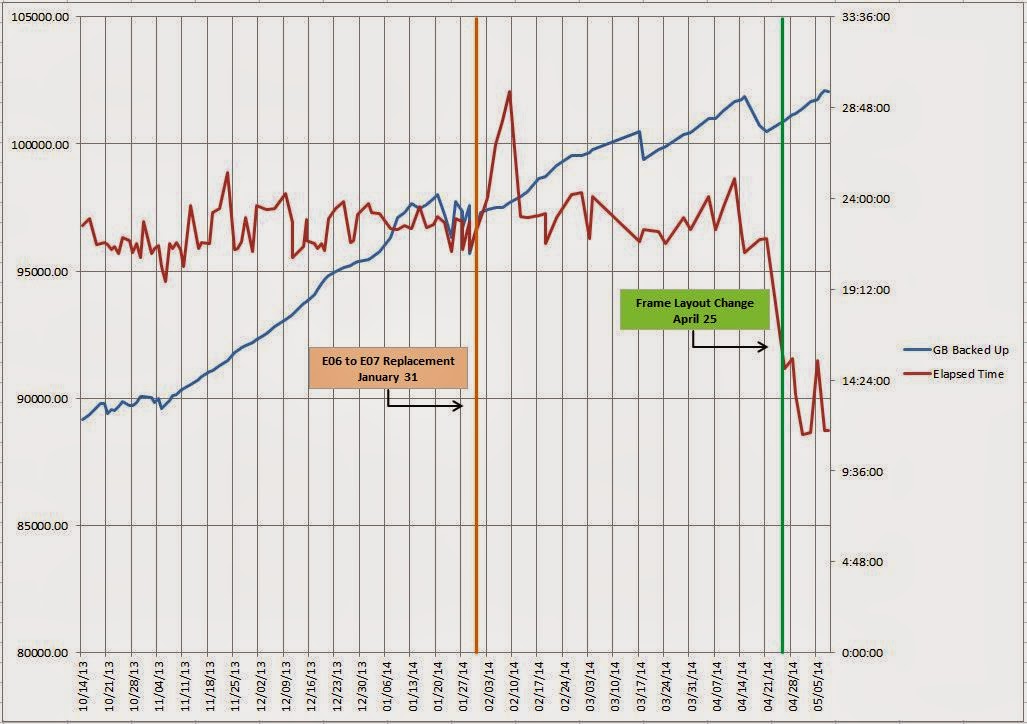 You'll notice that the backup time didn't change with the update of the tape drives from E06 to E07. Hardware layout matters more than the performance of the tape drives. When a vendor tells you just updating the hardware to newer iterations will increase performance take it will a grain of salt. In our case we did testing of the new tape drives and no performance gains were seen but the go ahead was given to upgrade to the newer hardware and as you'll see we didn't gain anything until we reworked the environment. Our task now is to identify how to increase TSM internal job performance (i.e. migration and storage pool backup) which has not seen significant performance gains from the tape upgrades.

Copyright Notice
All material on this blog is copyright Chad Small.
©2005 - 2020 Chad Small

The opinions expressed here are my personal opinions. Content published here is not read or approved in advance by my current employer and does not necessarily reflect their views and opinions.